In mythology the chain of destruction represents the battle between Shiva (Sharabha) and Vishnu (Gandaberunda) and a sculptor carved the tale in stone thousands of years ago, which can still be found in an inconspicuous corner in the famous Chennakesava temple in Hassan. In Prani-Parsara, author Dr K L Kamath penned the ‘chain of destruction’ as an ancient concept of the food chain in the environment. Designer Ron Dutta (36) sees it as wearable statement garments with a “narrative that fits perfectly in the current environment in the country”. And this forms the cornerstone of his latest collection, The Chain of Destruction. Dutta’s collection — fluid Chettiar wrap dhotis, langa davanis, kaftans, soft stoles, and more — is powerful and magical in its narration and construction. 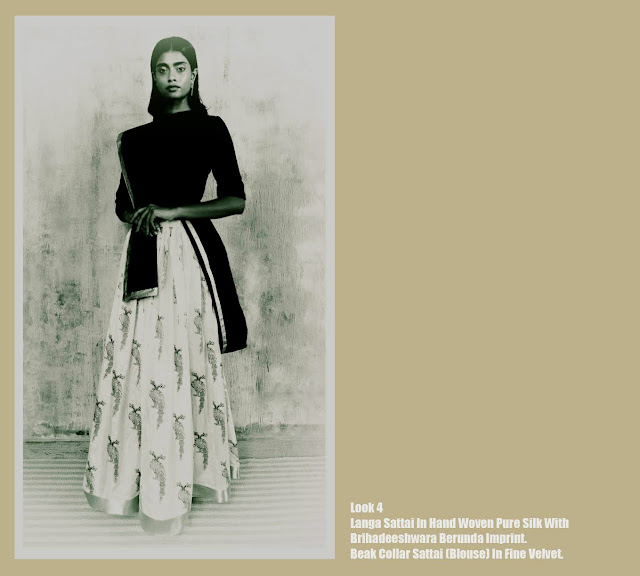 Kolkata-born Dutta who made this city his home (“because I found Bengaluru suitable for my artistic and creative pursuits”) is the founder of Fatherland, which is synonymous with revival and restoration of some rapidly vanishing Indian artistry. Dutta works extensively in the tribal areas, “with special permits”, where tourists are not admitted any more. He came across the tale of Gandaberunda five years ago when he saw a dance ensemble by Nritarutya, a City-based contemporary dance company. Fascinated by what he saw, Dutta, began his explorations. “I learnt about the bird’s immense magical power and strength,” he recalls. The young designer believes it was the “good luck charm” of the Gandaberunda, which brought him face-to-face with the stone carving in Hassan.

“Nobody even knew about its existence in the huge temple,” says Dutta who was on the verge of giving up his search, but, “I told myself, I just can’t go back to Bengaluru without trying one last time. I knew the carving was somewhere there in the temple because I had read about it.” The ninth person Dutta met knew of the “Gandaberunda in the temple”. A small stone slab, 5″ by 15″ that had the ‘chain of destruction’ chiselled on it. “It was almost God sent; a miracle. The first time I saw it I had the shivers — a profound and beautiful work of art,” Dutta says. Gandaberunda has been the insignia of Karnataka for the last 516 years. This bird is a part of South Indian folklore and mythology, especially in Karnataka and Tamil Nadu. 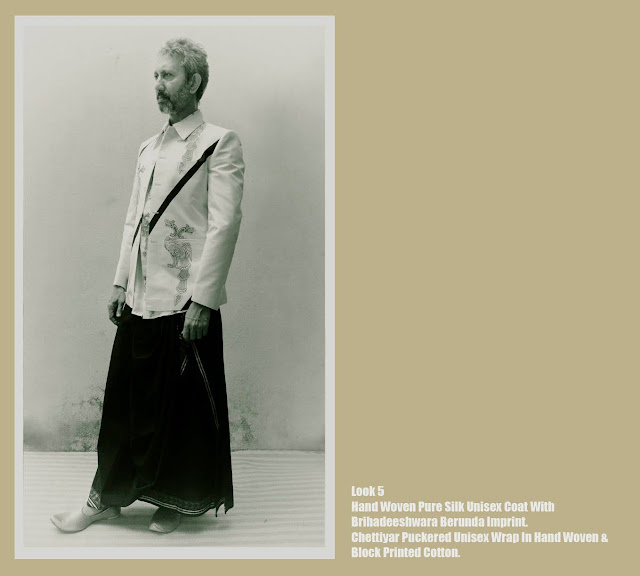 How does one translate an ancient stone carving into a fashion statement? By going back to the roots. And that’s what Dutta has done. Instead of digital printing the ‘chain of destruction’ onto the fabrics (“which would’ve been the easiest thing to do”), he opted for screen printing, which he says “is a great Indian artistry”. It took him more than two and a half months to “meticulously” create two screens with the “Gandaberunda imprint”. Dutta explains: “Using screen printing, southern forms of clothing like the Chettiar dhotis and langa davanis, and traditional fabrics like handwoven cotton, silks and khadhi is my way of staying faithful to the sculpture.”

The exquisite collection consists of 10 looks and 20 pieces — pure silk bandhgala, handwoven raw silk kaftan, Chettiar-pleated unisex wrap in silk and Chettiar-puckered unisex wrap in handwoven and block printed cotton, handwoven pure silk llanga sattai, langa davani and sari, kandangi and woven tasselled unisex cotton stole, earrings in alloy of brass copper and silver, handwoven unisex silk scarf — all with the Gandaberunda imprint. The colour palette of the collection is black and white with a touch of the darkest shade of emerald green. “I feel black and white is powerful in terms of relating to people,” he says. Strangely, the stark colour palette ably transforms the Gandaberunda from a mere design on fabric to a study of heritage. 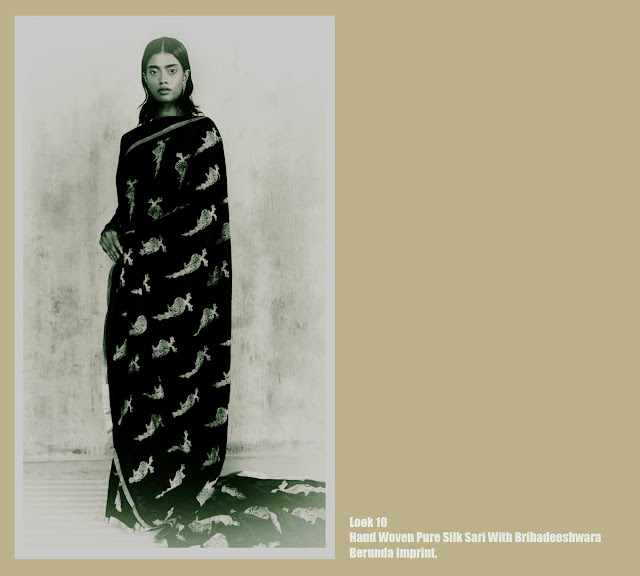 Why would somebody want to translate forgotten/rarely known carvings into garments? If we go past the “why not?” we will realise that it is human nature to tell stories; a primordial need. So we tell our stories through words, art, food, clothes and so on. “The carved ‘chain of destruction’ has layers to it,” Dutta says. “And when I translated this design onto fabric, for me, it was about the hierarchy of power. In today’s world, it is futile to wait for a saviour to save us. We have to find a Ganda-berunda in ourselves. To me, the two-headed bird symbolises awakening and versatility.” It’s a narrative that best describes the world that the designer inhabits today. And like the men and women before him, Dutta continues to tell his stories — in his case, through warps and weaves…

Dutta grew up watching his grandmothers custom-weave their own saris in collaboration with the weavers in Calcutta. He is a self-taught designer, and while still in college he began making kurtas for family and friends. The unique designs caught the eye of filmmaker Rituparno Ghosh who became a patron and invited Dutta to style Nandita Das in hisfilmShubo Muharat.  The lanky young designer with a untamed mane is charting his path in the fashion landscape of this country. And it seems to be an exciting course. Dutta does not “do runway shows”. Instead, he makes documentaries on the making of the garments. Even for his themed series on the two-headed Gandaberunda, he’s created a lookbook that is a photo-documentary with Neeraj Khabi and Archana Akhil Kumar as the lead cast. Dutta does not cater to mainstream fashion — no sequins and chiffons crowded with embroidery for this designer. He revels in reviving the vanishing crafts and weaves.

This site uses Akismet to reduce spam. Learn how your comment data is processed.

Discovering the world one story at a time.

I write on travel, art, culture, food, history and people.

Motto: “Wherever you go, go with all your heart.”